The latest database file (SimVimX.dat) is always included in the plugin archive, but note that it can be updated frequently, even if the main SimVimX plugin has not been updated to a new version. Always replace older SimVimX.dat file in the plugin folder with the latest one. It includes all predefined parameters, the "embedded" conversion data for some planes, name auto-correction list (to replace old parameter names with new ones), etc.

The status window shows the connected SimVimPanel instrument modules and connection status (you have to select to show the Status window): 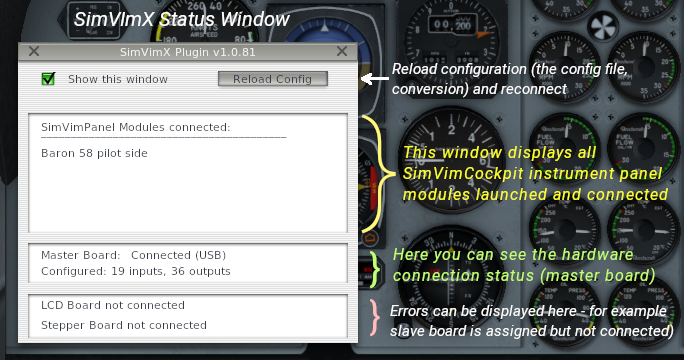 Plugin Update: Extract the new SimVimX zip file as-is to the X-Plane plugins folder and confirm the files replacement. Don't delete anything from the SimVimX plugins folder before update, as it contains your created data.cfg file and the devices.prf file that keep all configuration and settings! Note: if you have the older vesrion in the "SimVim or HCSCI" folder, delete that folder (or you can extract the new SimVimX version to that folder and then rename it to "SimVimX")

The RSC firmware is a heavily optimized program code, written from scratch (without using third-party Arduino libraries) to handle a large number of inputs, synchronize data control for a large number of different input/output devices, exchange data between plugin and “slave” boards.

RSC interface doesn't allow to use the controller board as a "usual" Arduino and users can not add any custom code, as there is no Arduino sketch, and the plugin uploads firmware directly to the board. At this moment the Atmega2560 is used as a convenient and easily available controller platform for RSC firmware.

The system is designed to work only with Roman's SimVimX plugin. The latest stable RSC firmware is usually included in the plugin. The RSC Firmware needs to be uploaded only once, directly from the SimVimX plugin menu at the first time, or automatically on updates, as described below.

Also, the latest or beta Firmware versions can be provided on the Patreon (or Boosty) blog as SimVimX.dat file that regular subscribers can download and place it to the SimVimX plugin folder after that it will be uploaded automatically. Without this file the in-built firmware will be used.

If you need to upload the Ethernet firmware version set the "Ethernet" checkbox before pressing "Upload".

On successful connection you will see the messages "Master Board: Connected (USB/LAN)" and "Configured: 1 Input, 1 Output"
This means your board is working correctly, and you can start wiring all input controls and output devices to the controller and use the Configuration tool to assign all of them, but before you can run a simple test to make sure:

The plugin checks the currently used firmware version on connection, and if it needs updating (the new stable firmwre is included to the plugin or plugin finds a beta RSC file in the plugin folder), the program uploads the new firmware to the board and then establishes connection. There's nothing more for you to do for the serial USB version.