Latest changes in the configuration interface

Based on user feedback and observing the use of the RSC/SimVimX interface, configurator and custom conversions, these changes have been implemented recently

Convert any input/output for a custom plane directly in the configurator:

- You create the data.cfg file using the configuration maps and, if your plane has custom commands/datarefs for some functions, you can convert any input/output directly in the configutor.

- In this case it is logical to use the same "combined" cfg file as configuration and conversion for a specific plane, without the need to have a separate converter (see below).

The currently used data.cfg file for SimVimX plugin was not supposed to be manually edited by the user (without the configurator) and it is mainly useful for user as reference "table" for your hardware connections.

The configuration tool now is used as before, to assign all inputs/outputs, and plus as converter for those keywords that need to be converted to custom datarefs and optional keywords replacement.

The saved data.cfg file will include the I/O assignments part for SimVimX plugin (and as description part for hardware connection reference), and data conversion part for different plane models you will use with your configuration.

This is he structure of the saved data.cfg file: 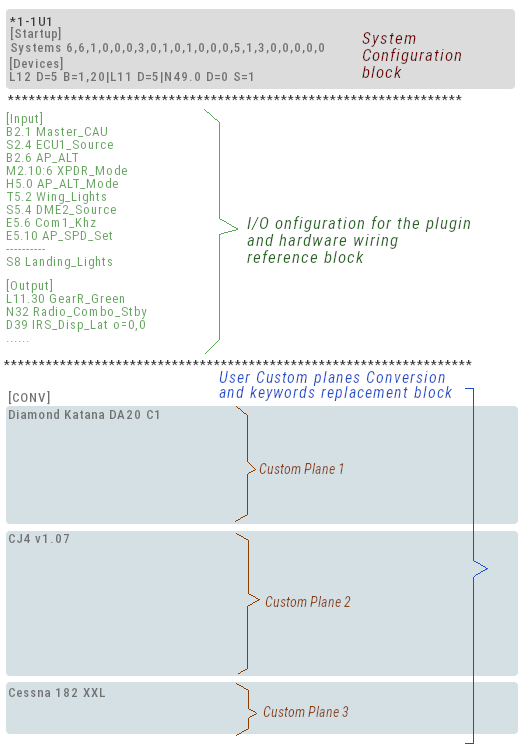 The main data.cfg file located in the SimVimX plugin folder still can be used with any loaded plane that have the same input/output functions.

- Also, you can add the "keyword replacement" for some plane directly in the configuration tool.

- This is needed if you want the same hardware switch or LED to be assigned to different functions in both planes.

- On plane start the SimVimX plugin replaces the parameters assigned in the cfg file with different ones listed in the plane-specific section.