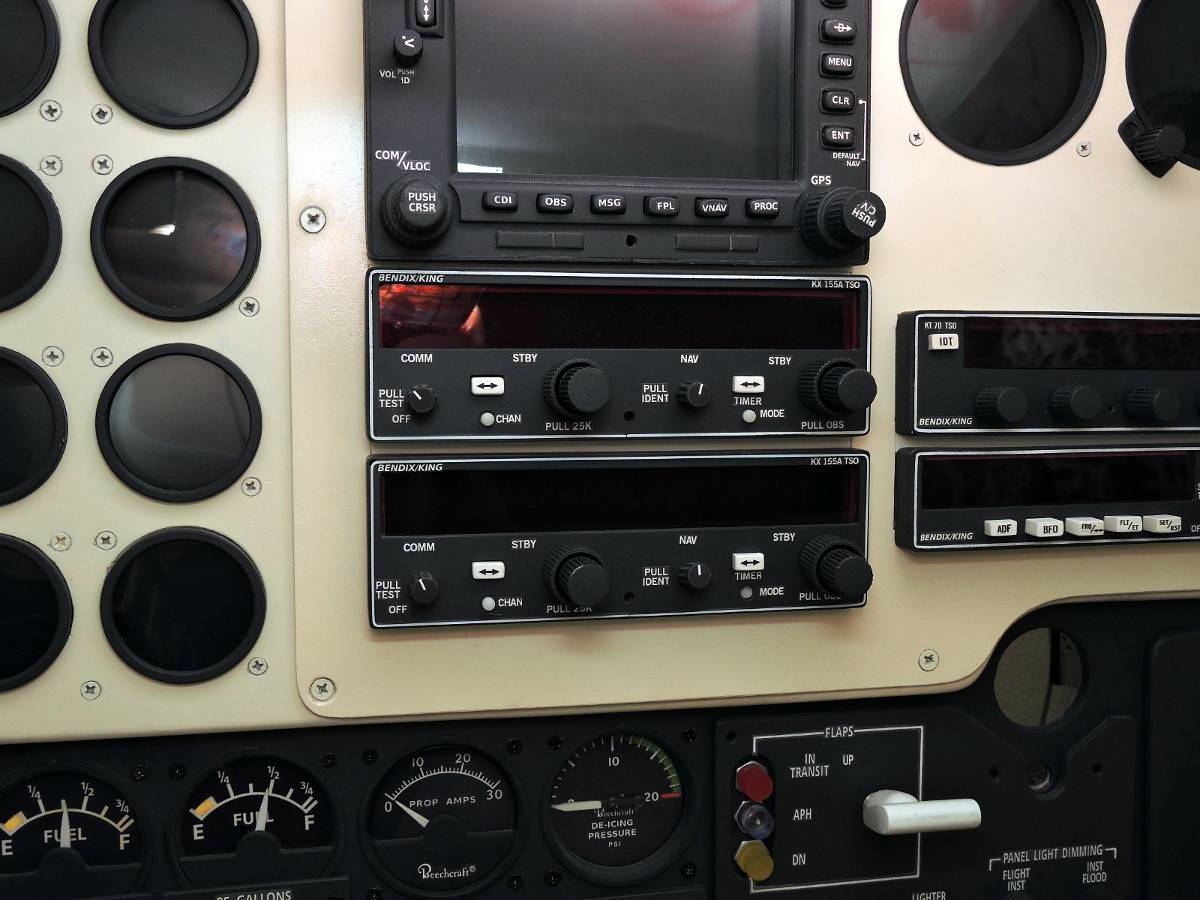 Like many aviation enthusiasts, I became a fan of flight sims as soon as they appeared on the PC, and naturally began to look for a suitable I / O interface for FS and tried solutions available at that time (early 2000s), but not with great success.

Later, when Roman (son) has involved into X-Plane project and has created plugins and protocols for communication with his instrument panel program (now it's SimVimPanel) and with hardware, I have created Arduino libraries to work with ARDref, and ArdSim(X) plugins.

Here is the brief historyI/O interface:

Do not consider the samples collected here as practical or finished programs for you cockpit simulator!

These code samples are uploaded here for information purpose, some of them were written as tests programs for familiarizing with Ethernet UDP protocol used in X-Plane to adapt it for Ardino to get data from X-Plane and send data from Arduino to X-Plane.

Some of them ( such as "B58-final") were used in our Baron 58 simulator, before we switched to our later "library-plugin-based" interface.

As you could see, in the earlier program code the "DATA" type message protocol was used, and the size of the program code was huge. Later versions gradually become more compact, the "CMND" and "DREF" type messages was used as primary data protocol. The X-Plane inbuilt Ethernet UDP protocol initially was used in our Baron Arduino/X-Plane interface.

All these programs were tested with Arduino Mega 1280 and Ethernet shield 5100.


Later, based on these works we have created Arduino libraries (XPData, ARDref, ArdSim) to replace a mess of single sketches. All these libraries were developed as a simple instrument for cockpit builders and they include several functions for sending input commands and dataref values to X-Plane and receiving data from it for output.

The Baron 58 panel simulator project was considered as platform for creating an effective control interface based on Arduino. Here you can see our early "pre-library" Arduino program code developments for Baron 58 cockpit before we switched to our later "library-plugin-based" interface.

Arduino controls for Baron 58 cockpit with 128-inputs extentsion board

Control interface for Baron-58 panel is based on one Arduino Mega-1280 and one Ethernet Shield. For input extension DIY extension board for additional 128 inputs was made (it uses 12 digital pins of Arduino). Together with another Arduino pins this interface represents all of Baron controls. For annunciators the output extension board was used. It controls the 24 LEDs of annunciators panel, gear and flap lamps and audio panel LEDs.

This B58 panel initially was controlled by "plain" code writen specifically for our panel (July 2013) and worked with X-Plane UDP protocol. It was quite large (~1000 lines) program for Arduino Mega1256.

The method UDP CMND is mainly used for all actuators (send commands to simulator instead of Datarefs used in previous vesions) The CMND function was added - comsend (char Data_com[]) The 3 functions are used for data transmission - comsend (for commands), drefsend ( for drefs), charsend (for chars).

The program reads each 16 ports of the expansion bus (one by one), checks each actuator position and, if in was changed it calls needed function for commands or datarefs and stores current input status in memory. Then the program reads next port (8 inputs)

Later it was rebuilt for XPData Library. Currently We plan to use this B58 Panel as test platform for our latest SimVimCockpit interface.

The XPlaneData a Library (later XPData) project was started (in 2014) to unificate of all our previous X-plane interface code samples.

The XPlaneData library provides network interaction between Arduino and X-Plane and includes functions for easy assignment different types of input, including common buttons, switches, encoders to each Arduino pins and functions for transmission of control data to X-Plane.

You can use library functions to assign specific commands or datarefs for chosen pins as arguments of the control functions in your Arduino code. This makes the Arduino programming for users quite simple - you need to write down specific function (button, switch, encoder, axes, LED output, etc.) and add pin number and dataref/command as arguments.

No other software and plugin is needed! All data is transmitted directly to X-Plane using its built-in UDP protocol.

You can use as many Arduino boards with XPData input library as you need to. All boards should have an Ethernet shield (or module) connected to your LAN.

All parameters that X-Plane can send using inbuilt UDP protocol you can find in the X-Plane menu "Settings->Data Input & Output. Currently there are 133 groups, each of them may contain up to 8 parameters, in form of 4-byte float numbers.

To find out what parameters each group includes, you can select some groups for output to the Cockpit View when flying. For this check the right box in this group. Using the Datarefs Editor plugin, you can correlate parameters that you want to check with corresponding datarefs.

For example, you need to receive gear positions for your indicators. These parameters are located in data group #67 named "landing gear deployment".
To start sending this group's data over network you need to check the left box in this group. Check the right box to output these parameters to the Cockpit View and watch how they are changing during operations.

To receive the values of controlled parameters from X-Plane, you need to tell X-Plane where to send the data ..
You can do this in the "Net Connections -- >> Data" preferences screen:

The size of the UDP packet that X-Plane will send is determined by the number of selected data groups. Each UDP packet transmitted by X-Plane begins with a 5-byte header (DATA<), in decimal code. The next four bytes contain the number of the group from 0 to 133 (actually only the first byte does, as the other 3 are "0"). For example, group #67 - Landing gear deployment ratio.

And the next 32 bytes represent the data of 8 parameters (4 bytes x8 ). Each 4-byte block is a floating point value of one parameter.


As we can see, often we have to receive many excessive data from X-Plane, when we need only one parameter in given group, but X-Plane can send the whole data group only. XPData library function process incoming UDP packet, find the group number and position index of the chosen parameter.

To read the value of incoming data, for example the "Flaps actual position" (fifth byte in the group #13) using XPData Library call the "ReadData(n, m)" function, where the "n" argument is the group number, and the "m" is the number of the parameter inside the group: Some functions can use data to directly send values on the output devices :


Please pay attention: pass the dataref and command strings to the functions without the "sim/" prefix. It's done to reduce the global variables memory usage, that can be critical when too many datarefs are used.

All examples are included in the package with this XPlaneData Library. Examples of X-Plane I/O interaction can be found in the Arduino IDE menu - "File" --> "Examples"---> XPData. Download newer Arduino IDE version from Arduino site if you have version less than 1.0.6 before using the library!

ARDref project was initiated as alternative for XPData library and has different data exchange protocol.

In online input configurator for ARDref you can easily assign any Arduini pin for the input action you need - for Toggle button, Increment button, Set button, Toggle switch or Encoder.

As a minimum, for basic input/output interface only one Arduino Mega with Ethernet Shield and with the little "master" program uploaded to it. All Arduino boards in the system should use the ARDref Library - you need to upload the program code to every board using this library, adding it to Arduino IDE.

All Arduino boards in the system should use the ARDref Library - you need to upload the program code to every board using this library, adding it to Arduino IDE.

Each additional Arduino board sends the status of their input pins, including analog, to the plugin only upon changing, so that the average program cycle takes just a few milliseconds (from 1 to about 5 ms). Each analog input is configured with its specified precision - from 2 to 1000 steps of sensitivity. The plugin also transmits dataref values to the Arduino only when they are changed, with specified precision for each.

CLOSED (in 2017) project, not updated. Next ArdSimX has fully replaced it.

The latest SimVimCockpit Interface is recommended if you are going to start your cockpit project.

ArdSim interface consists the plugin and custom library for Arduino and requires minimum coding. Any pin configured as input control linking it with specific X-Plane command or dataref to send data, or for use it as output getting dataref values through ArdSim plugin. To configure ArdSim input controls for X-Plane or get data from X-Plane for outputs ArdSim library has a set of convenient functions that you can use in Arduino code to setup input controls and assign specific action (switch, encoder, LED etc.) for any Arduino pin.

Next ArdSimX Interface doesn't include any functions that need to be used in Arduino code - all inputs/outputs are assigned using the online Configurator only!


The functions described on this page are related to ArdSim library ONLY.

The latest current SimVimCockpit Interface is recommended if you are going to start your cockpit project.

Get dataref values for output

Otherwise, if you need to get a dataref value for use in your specific program code or send it to some output device not included in the library, you can use the library functions "GetData()" together with "NewData()" with the dataref number from the out_#.cfg output list as argument.

The main part of this interface was the ArdSimX Plugin for X-Plane, that provided a link with ArdSimX firmware uploaded to Arduino board. You had to upload ArdSimX base skecth with the installed ArdSimX library (firmware). No Arduino coding required! Plugin and Firmware cannot work separately and are only used together! Arduino in this project is used only as a convenient controller platform for ArdSimX firmware and is not supposed to be programmed by user as usual Arduino.

ArdSimX Plugin and ArdSimX Firmware is archived project (active development in period of 2016-2018). It was a predecessor of the current RealSimControl/SimVim Interface and it is not supposed to be developed and supported further.