A 3-position ON-OFF-ON toggle switch has the same 3 terminals as (ON-ON) switch described before, but it has additional fixed position in the center (OFF). Thus, it acts as 2-way toggle switch, connecting the input terminal (pole) to one of the two output terminals or disconnecting both. It can be also considered as two separate toggle switches that should not be turned on at the same time. 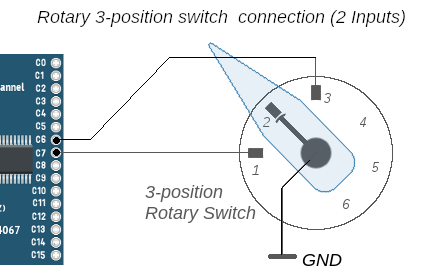 You can assign and connect a 3-position switch to the master board directly, but consider this only for testing purposes, for a simple control panel or if you need to add a switch to an existing system, otherwise always prefer using the multiplexer inputs.

In RealSimControl , a 3-position toggle switch always uses only 2 inputs. The throw terminals are connected to the pair of ajacent inputs (N, N+1), without using any pull-up/pull-down resistors. The "pole" terminal is connected to the common GND bus, and normally when the switch handle is in "UP or DN" (or L/R) position one of two input pins is closed to GND. In middle position both inputs are open.

3-position toggle switches may also have one or two momentary, spring-to-off actions (the parentheses denote momentary, not maintained states):

A 3-position toggle switch with two momentary positions, described as (ON)-OFF-(ON), jumps back to maintained position "OFF" when you release it and is used like two separate buttons. While you hold the switch at the momentary (ON) position, it stays on.

Or, as example, a 3-position ON-OFF-(ON) starter switch in King Air has two maintained positions (center OFF and upper mechanically locked ON) and one lower momentary "STARTER ONLY" position that is spring-loaded to OFF position.

Such switches may have 2 fixed ON states (Wiper_Speed_3-pos), one fixed and one momentary (APU_Switch_3-pos) or both momentarty, spring-to-off actions. In the latter cases it can be assigned as two momentary actions (buttons).

For some input functions it is not appropriate to use a simple 3-position toggle switch. In this case you can make suitable mechanics and use two buttons or toggle switches.

For example, a 3-position Fuel selector switch can be made using 2 toggle switches and an anker mechanism which guarantees that only one switch can be turned ON, in the left or right position of the handle: 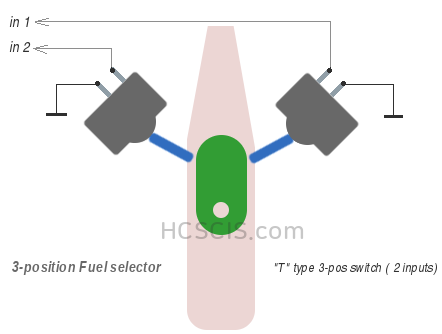 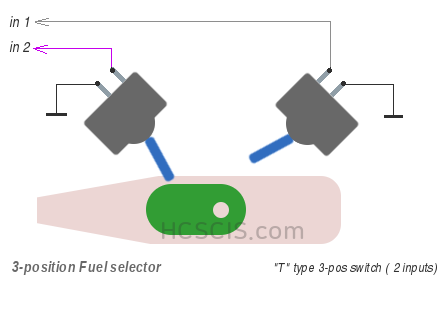 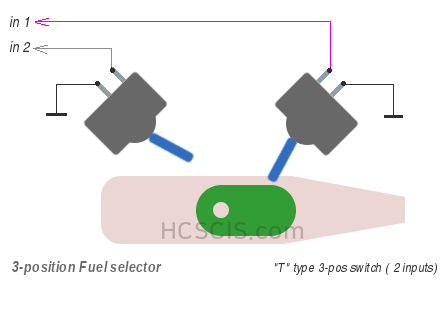