A lot of the systems in an aircraft cockpit are controlled with toggle switches and momentary push-buttons. For parameter value increment/decrement two coupled momentary push-buttons (- and +) can be used in your cockpit. It can be buttons for map zooming, clock setting, trim adjustment, as well as for any other incremental inputs instead of using encoders.

Any switch, button, or encoder can be connected to the master controller board directly, without using extension boards. But this is very inefficient, and you can use this option for initial tests purpose, or if you have a very simple control panel with a few switches, or you just need to add additional switches to your system.

Instead, you can extend each single input in RealSimControl system to x16, using a cheap extension boards (as described here, please read this first). This allows you to have maximum up to 800 digital inputs. RealSimControl firmware supports up to 50 multiplexers, that can be connected to any of 70 available on the master board pin. 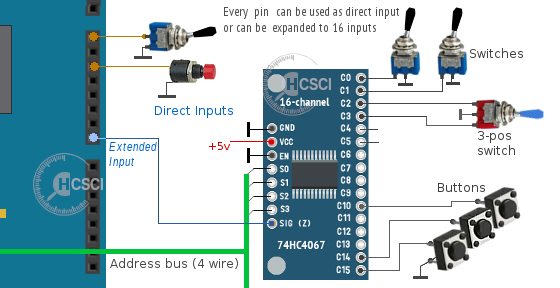 To work with RealSimControl correctly, the throw terminals of every toggle switch or push-button should be connected to one input directly, without using any pull-up/pull-down resistors. Another, "pole" terminal is connected to the common GND bus.

NOTE: Before fixing some switch (simple or 3-position) on your panel please read these "connection rules" for RealSimControl . <<<. For simple On/Off toggle switch used in most common panels there is one rule - when you short the controller pin to the GND - it is always the "ON" state. All you need is to test the toggle switch before and place it the way that it is in OFF state when not shorted to the GND.

Before you start building your home cockpit, you should do some homework - learn all about the systems and controls in the aircraft cockpit you want to build, clarify what type of switches you really need to have in your cockpit. Sometimes, for example, you may think you should use a momentary pushbutton to switch something on your overhead panel, but in reality it may turn out to be an alternate pushbutton swich with fixed states.

- Actuator - The outer part of the switch, which is moved by an external force (hand / finger) to operate the switch
- Terminals - The switch output/input leads to wiring/solderind.
- Every switch has two types of signal terminals - "Pole" and "Throw", at least one of each (SPST type). A switch is classified by the number of throws and poles.
- The poles are the "input" terminals and define how many independent circuits the switch can control.
- The throws are the output terminals and define the number of switchable output than can be connected to one pole input.
- Alternate/maintained switches can be OFF or ON, momentary switches return into normal position after you release their actuator.

The simplest toggle switch has only two terminals - one "Pole" and one "Throw", this is the SPST toggle switch type that has two fixed (maintained OFF-ON) states. There is no difference between pole and Throw for such switch in terms of electrical connection (you can connect it either way).

! Before using the switch, you need to find out where the pole terminal is located, most likely it is located in the center, but can also be located on either side (usually when the terminals are arranged asymmetrically ).

NOTE: In many cockpits, along with the toggle switches, alternate (not momentary) pushbutton switches are used, which have a locking mechanism to maintain the closed contacts position after releasing the button (such as "korry-type"). Another type of toggle switch is a rocker switch with two fixed positions, that is also used in some aircraft cockpits. All these switches work identically, having two fixed positions, but different actuators.

Toggle switches may also have one or two momentary, spring-to-off actions (the parentheses denote momentary, not maintained states):

A momentary toggle switch with two states/positions, described as OFF-(ON), jumps back to maintained position "OFF" when you release it. While you hold the switch at the momentary (ON) position, it stays on.

Momentary push-button switch doesn't have a fixed actuated state - it remains in its operated position only while it is being actuated and held.

Push-button with momentary action is used for commands that executes once each time the button is clicked (push-release), such as Autopilot HDG mode that toggles between two states on each click, or repeating increment commands, set/reset parameter value, etc.

For some operations, you may need a toggle switch that has momentary action and works like a momentary button and keeps the contacts closed only while its lever is held in operated position that is spring-loaded to OFF position. It can be configured either as a button or as a switch in the configurator, depending on the function it actuates.

A simple momentary pushbutton has two signal terminals (SPST type). Actually, there is no difference between them in terms of electrical connection. The push-button type can be either normally-open or normally-closed.

Momentary pushbutton switch remains in its operated position only while it is being actuated and held:

In its normal position (when the button is not actuated) the contacts inside of the pushbutton can be either open-circuit or short-circuit - these are so called "normally-open" (NO) or "normally-closed" (NC) pushbutton types.

This single pole, double throw (SPDT) momentary pushbutton switch has both types of contact (NO and NC), also called a changeover switch. It remains in its operated position only while it is being actuated and held:

Alternate push-button switch has an actuator locking mechanism to maintain it in operated position after releasing the button.

There are many such alternate pushbutton switches on the market, including "Korry-type" switches that are often used in overhead panels. Some of them can be too expensive for a home cockpit, especially those with LED option, but you can find enough cheap push-buttons on AliExpress or Ebay and make backlit cover caps by yourself.